Banana, What’s up with that?

Bananas are a fruit, right? Many question whether this is true, because bananas do not have seeds. Or are the seeds so small that we can no longer see them? Or are the seeds on another part of the plant that we do not see? The answer to the question “Do bananas have seeds?” is both yes and no. So is that a maybe?

Ah, Bananas, do indeed have seeds – dozens of them. They appear as tiny black specks in the middle of the banana. This is what defines them as a fruit. The seeds are sterile, meaning they won’t produce a new banana plant. After many generations of breeding and improvement, they have been very nearly eliminated. Fact is that the banana (the yellow thing you peel and eat) is undoubtedly a fruit (containing the seeds of the plant) though since commercially grown banana plants are sterile, the seeds are reduced to little specks. The banana plant is called a ‘banana tree’ in popular use, but it’s technically regarded as a herbaceous plant (or ‘herb’), not a tree, because the stem does not contain true woody tissue. So which is it,  A Fruit or a Herb? I guess only the banana knows for sure. And it’s not denying nor, confirming anything. I know it’s frerb.

Ah, Bananas, are fantastic. Bananas are in a family of plants called the Musaceae, or more generally the plantanes. If you go to a supermarket, and buy a plantane. However, you will most likely get a giant, possibly blackened, banana, which looks quite unpalatable. This is a cooking banana, and is very popular in Caribbean cooking. It does have seeds, which are quite large, and can be quite hard. So bananas do have seeds but not the kind we are talking about.

If you want to go with the more traditional banana, this has no obvious seeds. Sometimes you can see very tiny dot-like seeds near the center of the banana, but they are infertile. Poor little seeds! The reason for this, is that edible (the non cooking variety) are clonal, and most if not all the bananas eaten in the ‘West’ are the ‘Cavedish variety’. Being clonal the genetics of one banana plant and another is the same, and this means that they are susceptible to diseases, and in the past cultivated bananas have been destroyed by blight. This has the potential to happen again. If it does the banana producing industry will do what it did before we all ate the cavendish variety, it will cultivate a new ones. But the seeds will be no help! Poor little seeds.
Cultivated banana plants are not so much cloned, as clonal. This means that the are from the same genetic stock/plant. 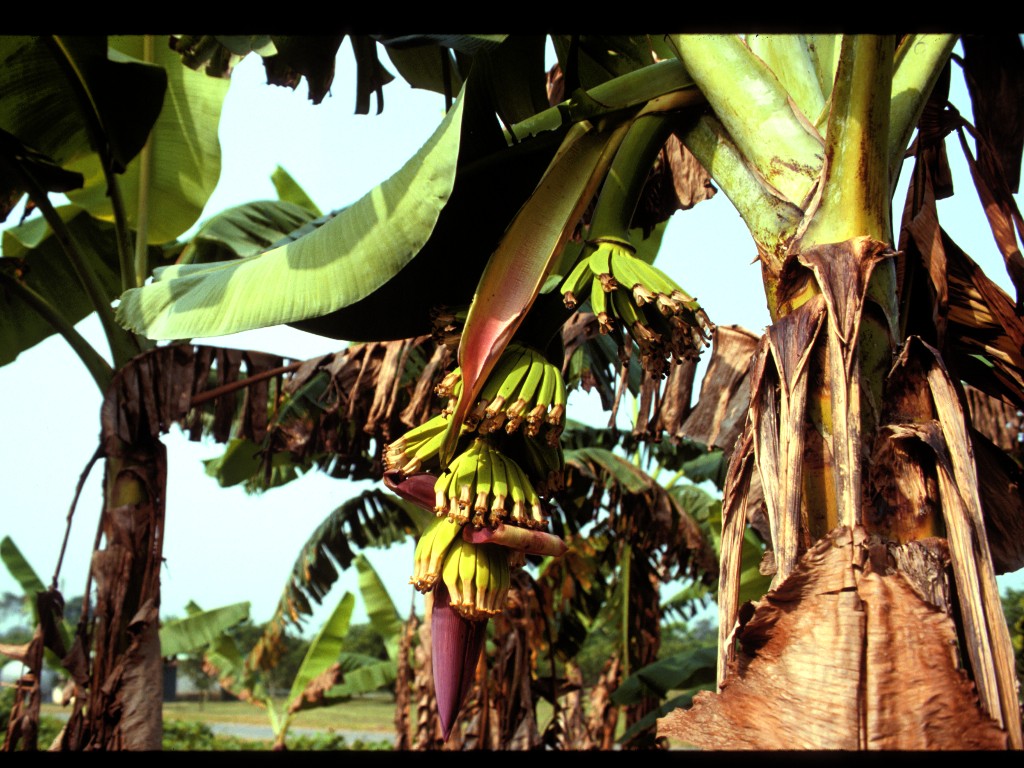 Ah, Bananas grow on trees. Or are they bushes?

Banana plants are not trees, but in fact one of the largest ‘herbs’. The botanical definition of a herb is a plant that does not have lignified tissues. Lignified tissues allow plants to make trunks and become trees! Bananas have a tightly ‘rolled’ series of leaf bases, forming a ‘pseudostem’, small outgrowths at the base of the pseudostem develop into new plants. Here we go again a frerb! Funny, it looks like a tree!

When consuming Bananas one should keep in mind the following 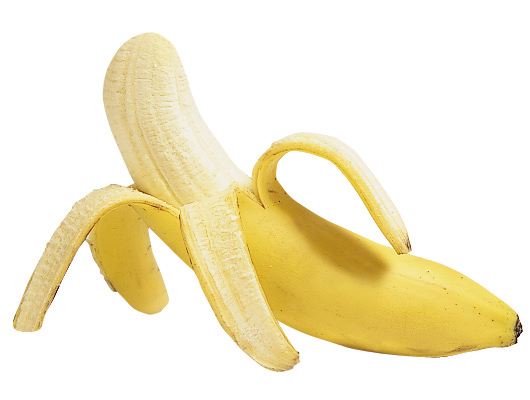 Ah, Bananas are good to eat.

Considerations:
The definition of a fruit is a mature ovary that contains seeds. So, technically, fruit that does not contain seeds is not really a fruit. However, there are ways in which fruits that usually have seeds can be seedless; so this definition has been relaxed. Seedless fruits have been cultivated to make them easier to eat. Bananas are pretty easy to eat.

History
Wild bananas have seeds, however, all bananas that are eaten today have been made seedless. Commercially available bananas are triploid, meaning they have three sets of genes rather than the two that are normally present. This process makes sexual reproduction impossible. Therefore, bananas are grown from offshoots of the parent plant rather than through the process of fertilization that might otherwise take place.

Size
Banana trees are very productive. Bananas come in large bunches, which can have hundreds of fruits per cluster. These clusters can weigh over 100 lbs. each. Most individual banana fruits are between 8 and 10 inches in length (though there are variations) and contain about 100 calories of nearly pure carbohydrate.

Types
Bananas come in two forms. The yellow sweet fruit that are available in American markets are of the Musa acuminata variety. These fruits ripen quickly after cutting them from the tree and must be shipped quickly. Bananas begin green, turn yellow, then speckle with brown until the entire banana is brown. Musa paradisiaca are the green bananas that do not turn sweet and are known as plantains, or cooking bananas. These fruits are more firm and starchier and lend themselves to cooking because they are hardier and more savory than sweet yellow bananas.

Benefits
Bananas are a good source of many vitamins and minerals. Potassium, for instance, is found in high concentrations within bananas and can help alleviate high blood pressure and replenish lost electrolytes after exercise. The fiber found in bananas helps the digestive system run smoothly and eases constipation. Bananas are also thought to be mood elevators, or help with symptoms of depression because of the presence of tryptophan. Tryptophan is a precursor to serotonin, a neurotransmitter that is lacking in depressed individuals. Depressed, eat a banana.

The true origin of Bananas is found in the region of Malaysia. By way of curious visitors, bananas traveled from there to India where they are mentioned in the Buddhist Pali writings dating back to the 6th century BCE. In his campaign in India in 327 BCE, Alexander the Great relished his first taste of the banana, a usual fruit he saw growing on tall trees. He is even credited with bringing the banana from India to the Western world.

According to Chinese historian Yang Fu, China was tending plantations of bananas in 200 CE. These bananas grew only in the southern region of China and were considered exotic, rare fruits that never became popular with the Chinese masses until the 20th century. 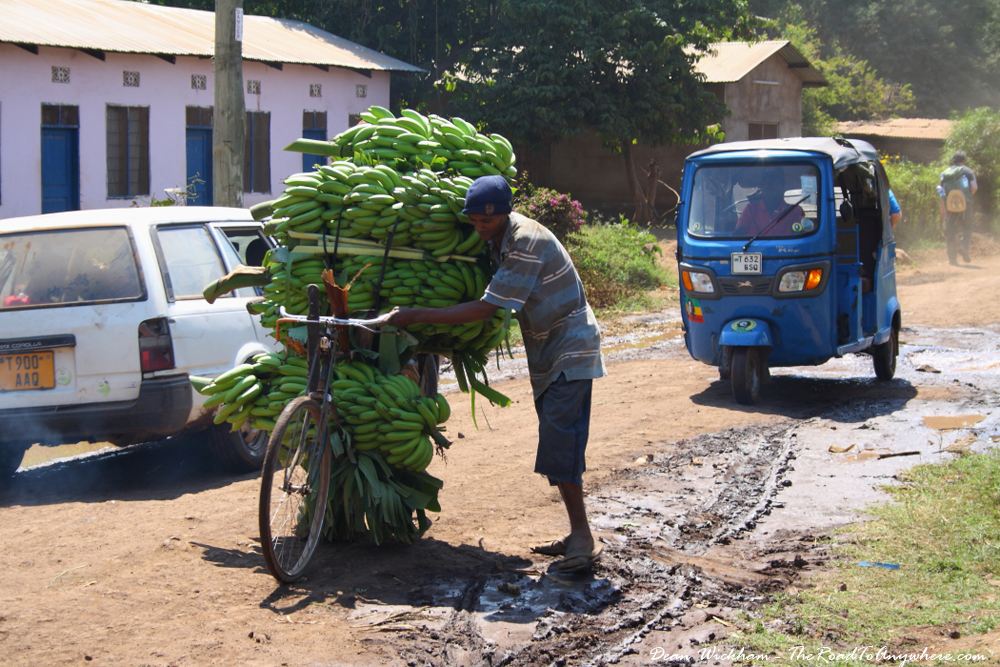 Eventually, this tropical fruit reached Madagascar, an island off the southeastern coast of Africa. Beginning in 650 CE Islamic warriors traveled into Africa and were actively engaged in the slave trade. Along with the thriving business in slave trading, the Arabs were successful in trading ivory along with abundant crops of bananas. Through their numerous travels westward via the slave trade, bananas eventually reached Guinea, a small area along the West Coast of Africa. By 1402 Portuguese sailors discovered the luscious tropical fruit in their travels to the African continent and populated the Canary lslands with their first banana plantations. Continuing the banana’s travels westward, the root stocks were packed onto a ship under the charge of Tomas de Berlanga, a Portuguese Franciscan monk who brought them to the Caribbean island of Santo Domingo from the Canary Islands in the year 1516. It wasn’t long before the banana became popular throughout the Caribbean as well as Central America.

Arabian slave traders are credited with giving the banana its popular name. The bananas that were growing in Africa as well as Southeast Asia were not the eight-to-twelve-inch giants that have become familiar in the U.S. supermarkets today. They were small, about as long as a man’s finger. Ergo the name banan, Arabic for finger. The Spaniards, who saw a similarity to the plane tree that grows in Spain, gave the plantain its Spanish name, platano. 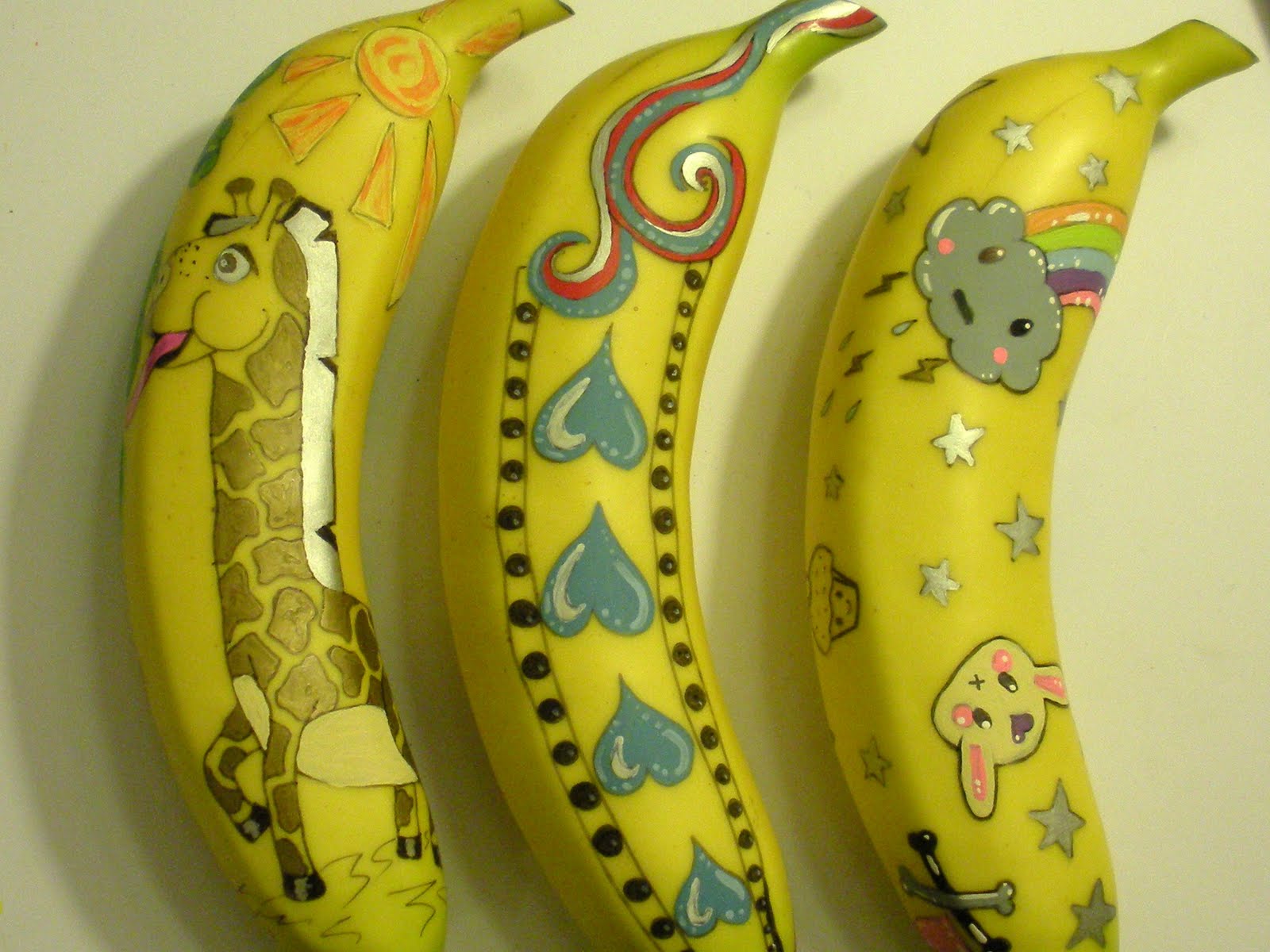 Ah, Bananas this was no help!

So there you have it. More information than you needed to know about Ah, Bananas. I just wanted to know if bananas had seeds and if they where a fruit or vegetable. Come to find out it’s a frerb. Yes, they do have seeds and no they don’t. It’s a tree but it’s not a tree. It’s a herb bush that grows fruit, Go figure. It may have seeds but the seeds are no good. Bananas traveled a lot, and had many names. It’s a clone but not a clone. Bananas turn colors and can be sweet or not. So, in essence we learned a lot of something about nothing at all. Ah, Bananas! Oh, by the way, I made that frerb thing up. Ah, Bananas!