CoronaV ~ Biological & Spiritual Warfare ~ This Bugs For YOU!

This Bug’s for YOU!

Please, have one. It’s on the house!

In place of using some buzz/clickbaity/possibly censored words, we will simply refer to the above “virus” (you all know which one we are referring to) with the simple acronym: “C19“. Additionally, references to the new cellular technology ‘5_G’ are referred to as “5giggity“. Also note, sources are referenced at the bottom of this article.

How, Doowans! Happy Friday the 13th. We hope you are enjoying your time at home as we experience this world/nationwide lockdown. It’s funny as my partner, and I was just talking recently about an introverts lifestyle. We (especially the more introverted one of us) spend much of our time at home already as life allows so it’s business as usual in this Doowan’s house. They didn’t need to tell us to stay home. We are HOME anyways! LOL We just found that funny but on to the point of this message!

SOW, As you all know, there is a “pandemic” upon us. Some news channels we heard even using the term “FALLOUT“…. HMMMMM…. I don’t know if I would go as far as to call this a fallout (as in like after a nuclear bomb is dropped on a population!!!!), but the media will do just about anything for attention revenue dollar. The truth is, and this is reported in The Media. The C19 “virus” is, in reality, not much (if any different) than the common cold. The “death toll” being mostly from folks already susceptible to illness of any kind, e.g. people with a low immune/emergy response or a predisposition. Anyways, stick with us here, there is much much more than meets the EYE going on, and we can almost certainly guarantee you will not hear this (TRUTH) form the media… 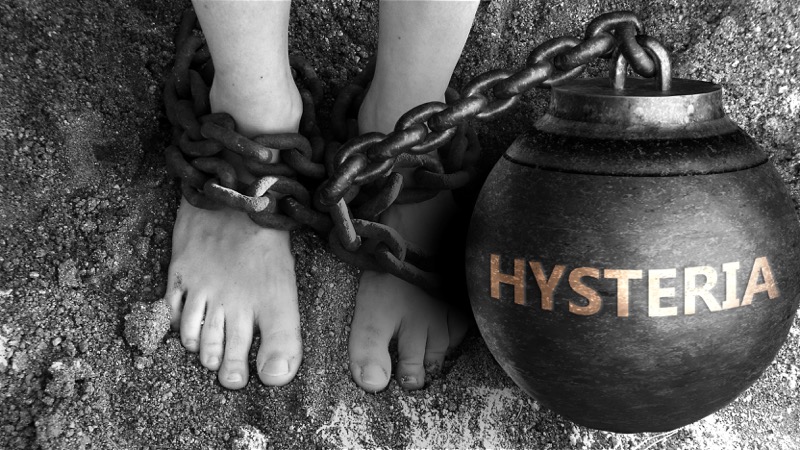 Order out of Chaos is the modus operandi

This “pandemic” event is multifaceted/multidimensional, and we would be making a hasty mistake to only look at this one-dimensionally.

With anything happening on a scale of this magnitude, we can guarantee there are many irons in the fire as they say. As well as many areas for those in places of power to benefit from the uninformed blinded by fear.

Through SEEing, as-in using one’s internal sight to SEE through the illusions of reality, patterns/pathways begin to form. We all have this innate ability within ourselves. To discern and SEE the truth in ANYthing NO external authority or direction is necessary, one must only WILL it. Connect to oneself and listen to the still small voice within and the inward sight will never steer you wrong.

This Doowan SEE’s/Smells something rotten. Here are a few high-level aspects/dimensions to consider which we will be touching on aspects of in this article:

Big business and The Media are making massive profits off of the hype/fear factor. None of this is happening by accident or haphazardly. Those in power are very aware and run this machine just like a business. Similar to how insider trading works, where one businessman tips off another of an impending event. All of the actions you see on the media and within government (govern – mind) are premeditated actions. With scares of infectious dis-ease rampant across the globe, LAB Corp’s and other major pharmaceutical companies benefit as well as the sanitation industries. Hell, one cannot even find hand sanitizer; they simply can’t make enough to keep up with demand. Someone(s) is making an insurmountable wealth off of this while others are told they can’t even work right now due to the “dangers” of infection at the workplace… Again, the few are profiting off of the fear of others. Unfortunately, this is only the beginning… 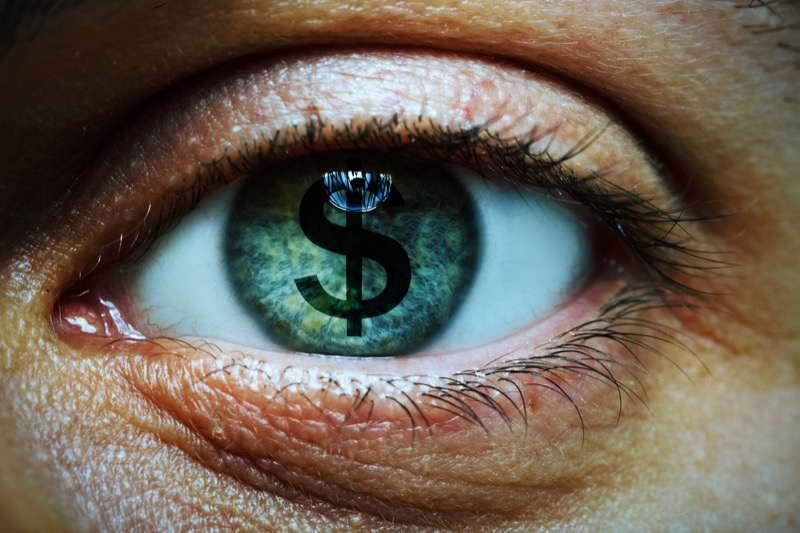 There is nothing “New” Under the Sun

While version C19 may be “new” and its origin debatable (hint: man created it), this isn’t the first time we’ve had a major “outbreak” of a what we call a virus that threatens the human race. When we look closely, we will find correlation in the present as we examine the mass hysteria “virus” events of the past. It’s not this Doowan’s job to list all of them for Your Reason. Though, I will say it is interesting when one looks at the timeline over the last century regarding technological advancement (specifically radio and microwave emitting) coinciding with a widespread new “virus” strain.

Through a recent and bizarre realEYEsation, a “virus” is a bodily reaction/rejection to cellular/DNA-RNA poisoning coming from the presence of foreign element(s), e.g., radiation, and many other pollutants in our local environment. Viruses are not the cause of anything (sickness or other) but rather a response to something foreign in the natural biome. When looked at the word virus in this way, more truth begins to unveil itself.

With the “advancement” of technology, we have known of the ill effects incurred on our human and virtually all biology. Anyone remember, “Don’t look at the microwave” or “Stop sitting so close to the TV!”? These “developments” have far-reaching effects still happening today. There is a researchable connection to outbreaks of illness associated to significant changes in the electro-magnetic environment on Earth (see source below). For example, the development of the first radio technologies used commercially in 1918 and the influenza pandemic which accompanied it. This pandemic is not so dissimilar to what we are experiencing now.

The hue-man body and Merkaba divine vehicle, which Human Beings inhabit, is one of, if not the most, adaptable organism in this Universe. The limitations live only within a small-minded world view. The Masters of this reality have known and demonstrated the abilities of this divine vehicle for millennia now. When it comes to modern-day man and his wholly degraded self, the oppressed have only a memory of something better through fantasy—the likes of which we see on TV, movies, and video games, etc. Soon enough, we will degrade a step further (well, those who choose The Machine Kingdom path) into a total world of virtual reality. Where there will be no pain, and one may live in a virtual “paradise” for eternity. Wait a sec… could we be IN the matrix already?

We, as a population, by in large, are so dis-embodied from Self AND Mother Earth, perhaps most than we have ever been. Indeed, we are all “connected” now (wirelessly via 3,4,5Giggity and beyond); however, we are truly DISconnected more than any point in history.

The body is extremely capable but will vary according to several key factors depending on the individual’s development. We ALL have the potential to tap into the source of higher intelligence and WILL it. Most haven’t even the faintest idea… This body has for 1000’s of years adapted and survived multiple waves of MASS changes on Earth and beyond. It all depends on your spiritual/mental/physical (no particular order) capacity. All humans (and all beings utilizing the Mold of Man figure) have the capacity to perform in ways most only dream about. Flying, teleportation, manipulation of matter (including removing virus/dis-ease and healing) are just a few examples of powers going mostly untapped.

This message is a call to Awaken the source within, All answers reside within, and we need to WAKE UP now more than ever……….. 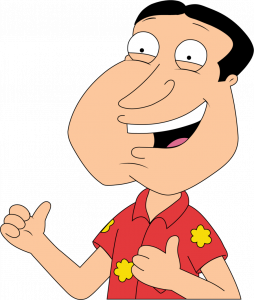 Some fun food-for-thought facts/truths to ponder:

Soon enough, this C19 “virus” will all be in the past, and sheeple will be back to their safety blanket called “normal” life. IF and likely when 5Giggity rolls out, as always, the human body will adapt and eventually we will forget again. However, a new benchmark has been set here and now. “THIS IS JUST A TEST.” One can expect that the line has been and is being pushed/tested to see how far they can take this propaganda machine. It’s clear as far as the VAST majority has bought into this fear game!!! Thanks, earthlings! JK, we are all(most) earthlings and have a hand/play in this together. If just one shall awaken….

Don’t panic, chill out, and enjoy the introspection time. Sit in stillness/meditation. Relinquish your thoughts, negative or positive. Find neutrality. It is in the stillness that truth resides. Open your windows and walk outside to nature, put your bare feet on the Earth if you have that available. One will quickly notice that the birds are still chirping, flowers still blooming, and all matter of life LIVING regardless of the silliness in our Hue-man world.

Increase your frequency and don’t feed the fear/propaganda. Raising your awareness/consciousness/spiritual center is the best way to combat any “virus” or other dis-ease. One is/will not be susceptible to these adversarial forces with adequate internal frequency resonance. Connect with Earth, it is clear we are disconnected with the sheer number of folks impacted by this recent fear-mongering 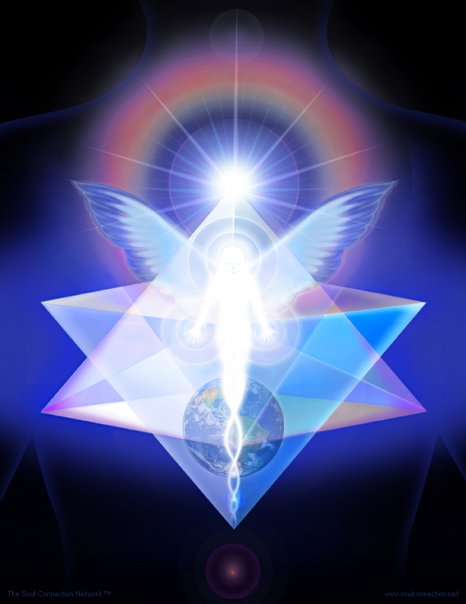 We will leave you with this excerpt from the great dark poet Bill Hicks, who is turning over in his grave at this point.

“The eyes of fear want you to put bigger locks on your doors, buy guns, close yourself off. The eyes of love instead see all of us as one. Here’s what we can do to change the world, right now, to a better ride. Take all that money we spend on weapons and defenses each year and instead spend it feeding and clothing and educating the poor of the world, which it would pay for many times over, not one human being excluded, and we could explore space, together, both inner and outer, forever, in peace.” —Full Quote

It is now approx 6PM East Coast Standard time on Friday the 13th 2020. At the time of this writing/publication, the US is experiencing a MASS internet outage (due to “network overload from too many people working from home”). Ironically, it didn’t go out during the workday today and that is when most were at home working… anyways, this tells us Doowan’s we are doing something right by putting this work out. The message will get out one way or another! Enjoi!

These screenshots below were taken from DownDector shortly after the outage began. You can see that the concentration of outages are mostly at large metropolitan zones across the US: 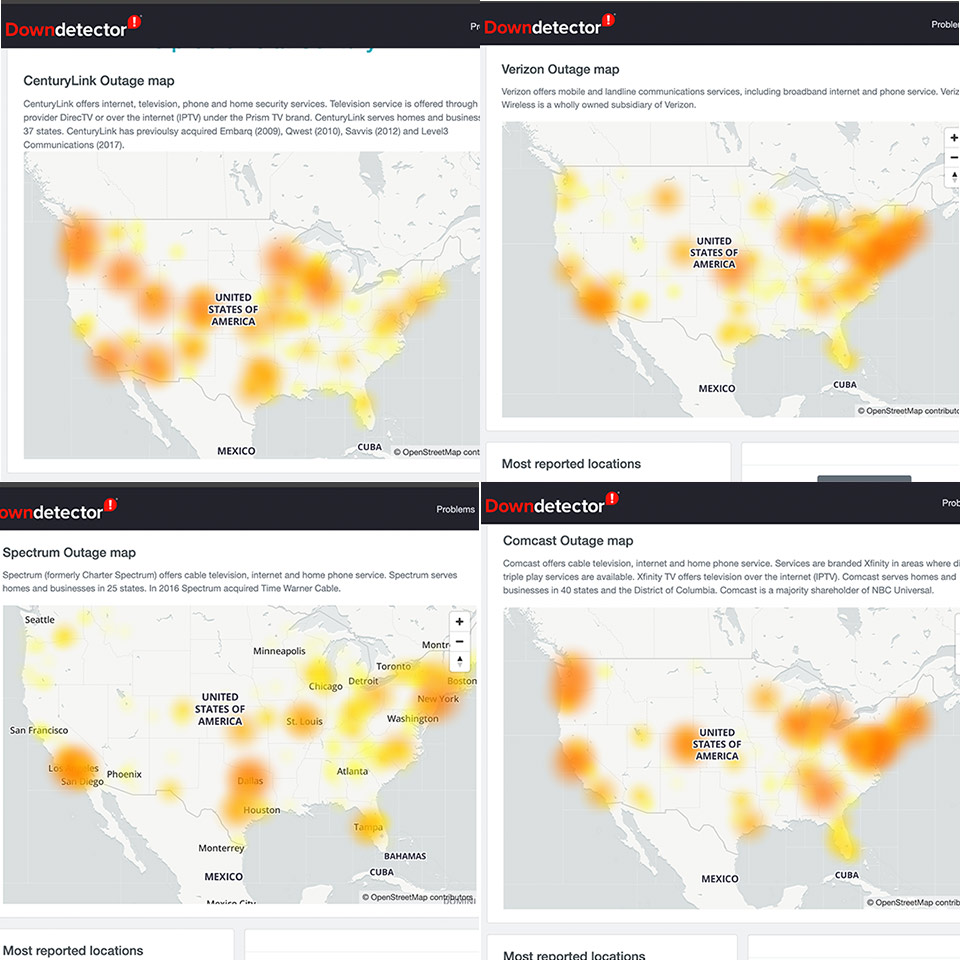 1st don’t freak out over ANY situation (including C19 or this 5Giggity non-sense). We will prevail and change can happen in the blink of an eye. RIGHT HERE RIGHT NOW, it is only a concept/construct of reality. YOU are multidimensional, and the fact you are here speaks IMMENSELY.

It’s always a good idea to have SOME sort of food/water/basic necessities on hand for any occasion, not just for these “freakout” moments from media propaganda times.

Supplements exist, both naturally occurring and commercially available that combat some of these harmful frequencies being hurled at us currently (All derived from the Earth/local solar system and available on Earth):

Foods to consider intaking LESS or avoiding all together while detoxing: 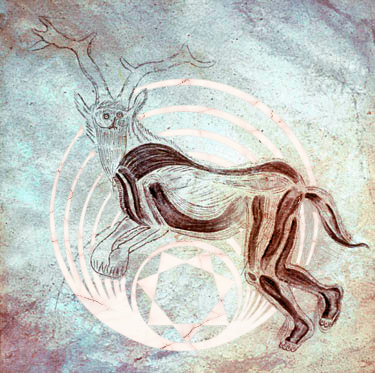