We Are What We Eat

We Are What We Eat 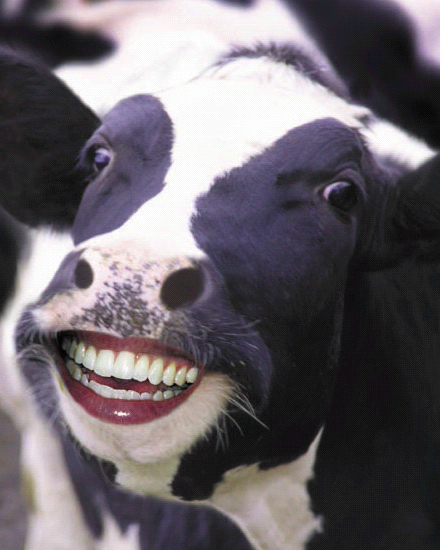 We are What We eat? Do I look like grass to you?

We Are What We Eat: Just doesn’t apply Anymore!

Oh, and so much more. We Are What We Eat as the saying goes, and this is an understatement when ones doesn’t know what we are eating. Now days even reading labels doesn’t really help.  As the reader well soon find out.

(Newser) – Queasy consumers in Britain and Ireland are chucking out frozen hamburgers after learning that they could contain horse meat. Food safety experts conducting DNA tests found that around a third of burgers from major supermarket chains contained horse DNA, the Telegraph reports. The levels of horse DNA were fairly low in most samples, but one burger product from Tesco was found to be 29% horse meat, which is legal to sell in both countries but is not commonly eaten.
Pig DNA was also found in a majority of beef burger products and in other processed foods containing beef. “In Ireland, it is not in our culture to eat horse meat and therefore, we do not expect to find it in a burger,” says the chief of Ireland’s food safety authority. “Likewise, for some religious groups or people who abstain from eating pig meat, the presence of traces of pig DNA is unacceptable.” Officials say that while the presence of pig DNA could be because pork is processed in the same plants as beef, the horse DNA is a mystery.

I wonder if it’s the DNA of a horse that’s the mystery. Or how the DNA of a cow was changed to a horse. Monsantos got some GMOZ explaining to do! Do you think the F.D.A. will approve? Headlines: New GMOZ Animal just approved for human consumption. The Coworse, coming to a table near you! We Are What We Eat! 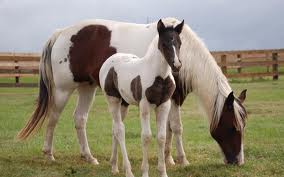 We Are What We Eat The New look for Beef, the Coworse!

(Newser) – First British and Irish consumers were aghast to discover horse meat in their hamburgers. Now, horse meat is turning up in frozen beef lasagnas, with 11 of 18 tested “Findus” products containing horse meat in the 60% to 100% range, reports the AP. “Findus” pulled its beef lasagnas from stores and apologized immediately, saying it had “fully resolved” issues with its meat supplies.
While horse meat is not considered a hazard per se, food safety officials are testing the meat for the veterinary drug phenylbutazone, which is banned from entering the food chain. Many food officials are pointing fingers at Irish beef exporters, who in turn are blaming Polish suppliers. The UK Food Standards Agency is calling for more comprehensive meat testing to ensure labels accurately represent products.

I’ll say they should recall their product, because they weren’t beef lasagnas. You know “Findus” sounds like a challenge! And somebody found them. Now somebody needs to fine them. One has to wonder. How they resolved this? Changing the label or actually putting beef in their products. You know we may never know and that’s scary! We Are What We Eat! 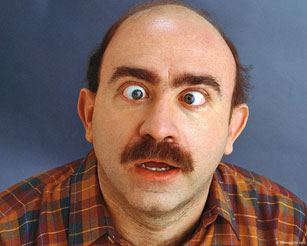 We are What We Eat I just had a Coworse

(Newser) – Doctors have been wrestling with a newly discovered illness that attacks mainly young women and looks a lot like psychosis. In Philadelphia, hospitalized women appeared possessed, crying or laughing hysterically one moment and turning catatonic the next. One had seizures and left her arms stuck out in front of her. Finally doctors realized they weren’t crazy—they were suffering from an auto immune disease known as Anti-NMDA Receptor Encephalitis, reports CBS Philadelphia.
Discovered six years ago, the illness strikes the brain with antibodies and causes it to swell—as one doctor explained to two nervous parents: “He told them her brain is on fire,” says a woman who was hospitalized for weeks. “He used those words: ‘Her brain is on fire.'” A spinal fluid test can spot the disease and immunotherapy can treat it, but there is no cure; all patients face possible relapses. Now a former patient is trying to get the word out, explaining that “there could be people in comas right now or people stuck in psych wards that have this disease and aren’t being treated properly.”

Damn, Another new disease! Do you think they will ever put the GMOZ link to diseases together? Another auto immune disease that cause inflammation and swelling. “Finally doctors realized they weren’t crazy”. Who the patients or the doctors? The patients weren’t crazy, poor folks they were suffering. The jury is still out on the doctors. You know it doesn’t ever say if men are affected. I wonder if our testosterone might have something to do with that. Men, we owe are Women an apology. This whole time we have been thinking they were crazy. Good thing those doctors figured this out! We Are What We Eat!

Wait there’s still more we are just getting warmed up.

(Newser) – Sugar-packed soda has been linked to a boosted diabetes risk—but it turns out the diet version may pose an even bigger threat. Researchers tracked 66,000 French women over 14 years; the volunteers were middle-aged or older when the study began. People who drank 12 ounces of either kind of soda per week had a one-third higher risk of diabetes compared to those who drank 100% fruit juice; those who drank 20 ounces a week saw a doubled risk, the AFP reports.
But here’s the kicker: Those who drank 16.9 ounces of diet soda per week had a 15% higher risk of diabetes than regular-soda drinkers, while those who downed 50 ounces of diet soda per week had a 59% higher diabetes risk. Diet soda drinkers generally drank more soda overall than regular soda fans, which may boost the danger, the Daily Mail notes. More research is needed, however, to be certain of a link, say researchers, who made note of a previous study that showed aspartame affects insulin levels much like sucrose does. The news comes on the heels of word that diet soda may cause depression—and, along similar lines, that margarine may be worse for you than butter.

OMG, you don’t think that they want you to drink regular soda now because of the Diet Soda study that link it to depression, do ya! Na, all that sugar, it turns out is really good for you. And really the Diet soda drinkers were drinking way to much. The soda manufactures don’t what us to be depressed anymore. So they did a new study that proves regular soda is much better for us. They sure are nice guys. We Are What We Eat!

Actually, Margarine May Be Worse Than Butter

(Newser) – Eating margarine in an effort to safeguard your heart? In what Forbes terms “an exceedingly strange turn of events,” it turns out the fake stuff may be worse for your heart than the real stuff. Researchers were able to access previously unpublished mortality data from a nearly five-decades-old study of 458 heart disease patients. The data revealed that while the group that switched from saturated fatty acids (ie, butter) to polyunsaturated fatty acids (in this case, safflower oil and safflower margarine) did indeed see a 13% drop in cholesterol, they were more likely to die from cardiovascular or coronary heart disease.
As the Daily Mail reports, this is the only “randomized controlled study” to look at the increased consumption of omega 6. Also known as linoleic acid, it’s found in margarine made from corn, sunflower, safflower, and soybean oil and happens to be the most common PUFA found in most Western diets. The body converts it to arachidonic acid, which can ultimately spur inflammation … which just so happens to be a leading cause of heart disease. But the Mail spoke with a number of scientists who pooh-poohed the study, with one calling it “enormously underpowered.” 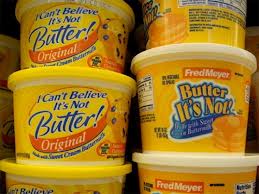 We Are What We Eat, True Story!

I have a true story that happen to me when I was a young man that fits right in with this. Can I share it? Well I AM glad you asked!

Just out of high school I was looking for work. And it just so happened that my father worked for a manufacturing firm in L.A. California were I grew up. I’m a valley boy for Sure, for Sure. So, I applied and got the job. Well what do you know!

The firm built conveyors and manufactured just about anything. My dad could draw up. Well it just so happened that this firm got a job for a large margarine maker in L.A. that want to put large grates over their margarine vasts. So the firm I worked for made the grates and we when to install them. We walked in and I was looking around and was wondering why these vasts needed the grates. So I asked one of the workers there my question. And you know this kind gentleman just turned to me a pointed up! As my eyes followed his finger and moved towards the ceiling of this plant.

I noticed that the place was filled with all types of birds and pigeons fly around and rousting on the rafters above the vasts of margarine. Now mind you these were grates not solid covers so I asked the foreman of our job, how these grates were going to help with this problem. He just smiled and said that the grates were need to keep the dead birds from falling into the vasts. Well of course to me this made perfect sense.

We finished the install and on the way back to our plant it finally hit me. I turned to the foreman and asked. The grates will keep the dead birds out all right. But how are the grates going to help with all the bird poop and feathers that fall into the vasts. He just smiled and said. Oh that, they just screen those out of the margarine. It’s what gives the margarine it’s flavor. True story!

I have never eaten margarine to this day. When they say, “I can’t believe it’s not butter.” Well, you might want to believe them from now on. Seeing is believing!

So I AM a true believer that butter is better for you than margarine.

We Are What We Eat!
Anybody growing Feathers yet?

Hope you enjoy this moment. Cheer up the next scientific study might find the cause for Asthma, is breathing. For now I think I’ll stick with drinking Beer. The last study suggested that that’s the cause of persistent peeing. Hey, don’t they have a pill for that? I better go to the doctors! Na, They will just think I AM crazy. You know they could be right.

Disclaimer: This article is not intended to provide medical advice, diagnosis or treatment of any kind. We don’t imply or condone the breaking of any laws. For educational purposes Only. Or are we telling anybody to do anything regarding themselves. We are all big boys and girls and can make up our own minds, if the government Clowns would just take the fluoride out of the water supplies. But that’s not going to happen, anytime soon.

Keep us in your heart. You know you are in ours! Love and Light to you all.

We Are What We Eat, Sometimes that can be Scary!